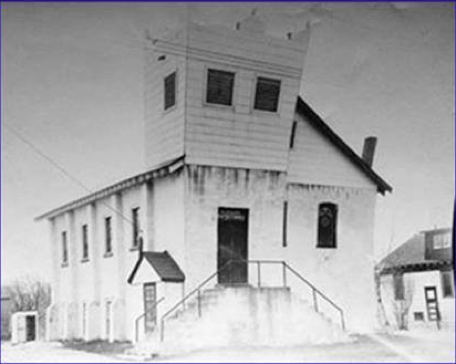 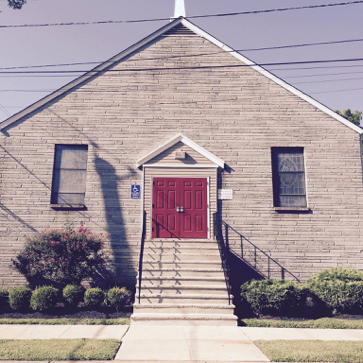 In 1918, shortly after arriving to Hamilton Township, then known as White City Park, Reverend James L. Philips and his family felt the need for a church in the area.  They began having prayer services in their home, and from these little gatherings the desire to form an actual church was conceived.  The first members were:  James and Florence Philips; his son Talmadge and wife Grace; his son Fred and wife Carrie; and his daughter Viola and husband William Rice.

The first meeting as an organized religious body was held in the dining room of “Pop Philips”, and they continued having service there until the church was built in 1920.  The first members to join outside of the family were Carrie Robinson and Fannie Stricklin.  The first Deacon was George Edwards and the first Trustee was Gus Broaddus.  The first church mother was Florence Philips and the first Sunday School Superintendent was William Rice.  This little group continued to progress and became known as the Saint Phillips Baptist Church.  The official incorporated name of the church in June 1920 was Saint Philips Baptist Church of Broad Street Park.

Reverend Philips, the founder, after two years of organizing the church, officially served as pastor for four years, and then resigned.  His successor was Reverend William Turner, followed by Reverend D.D. Dantly.  The fourth pastor of Saint Phillips was Reverend Talmadge Philips, son of Rev. James Philips. He served as pastor for the next five years, during which time the framework of the main auditorium of the church was erected.  The church began worshipping in the basement of the church under his leadership.

Reverend John Otis Wilson was called to pastor in 1932. His great thrust was teaching the members to love and sacrifice.  Within the first few years of his pastorate, he moved the church from worshipping in the basement into the sanctuary, purchased furniture throughout the church, and installed the heating system.  Many clubs were organized under the guidance of Pastor Wilson, including a young adult choir.

Misfortune befell Saint Phillips on April 23, 1954, when our church was razed by fire. Services continued in various churches in the area until we found a more stable temporary home in the garage of Reverend Millard R. Anderson. In August 1954, a ground breaking ceremony was held and the actual rebuilding of the church commenced.  On May, 22, 1955, members marched proudly into the sanctuary of the rebuilt church.

It was the dream of Pastor Wilson to obtain property for an educational and community center, and a house to the rear of the church was purchased.  It later became the first free Day Care Center of Hamilton and later became the first Community Center in the area. In 1970, with landscaping complete and a blacktop parking lot separating the two structures, the Woman’s Auxiliary worked hard to raise enough money at their annual rally to clear the church’s debt.  A mortgage burning ceremony was held shortly thereafter.  Reverend Wilson is the longest serving pastor in the church’s history, serving for forty years.  The church and community was greatly saddened by his death on January 25, 1972.  The center later moved to 169 Wilfred Avenue, and is currently known as the John O. Wilson Neighborhood Center, Inc. in honor of his dedicated, pioneering service.  In 2016, a portion of Wilfred Avenue where the center is located was designated “John O. Wilson Way”.

The church prayerfully and patiently waited for a year in search of a new pastor as led by the Deacon and Trustee Boards, with Deacon Luther Tucker as its chairman. On May 13, 1973, Reverend Hubert Roland Hunter was called to be the sixth pastor. He came to Saint Phillips from the Church of God in Christ, and in the early part of his tenure, the church became inactive with the Middlesex Central Baptist Association where it had been involved for many years.  However, years later, under Pastor Hunter’s leadership, the church became a leading force in the Association. Reverend Hunter would later become President of the Congress of Christian Education and also serve as Moderator of the Association.  He would later serve as President of the Concerned Pastors and Ministers of Trenton & Vicinity.  Many souls were added to the church under his leadership, extensive renovations were done to the church, and a new wing with two classrooms, four offices, a conference room and two bathrooms were added in 1991.

After the death of Mother Ida Lovett, Pastor Hunter appointed Deaconess Louise Jackson as Mother of the Church in 1977.  After the death of Deacon Luther Tucker, Deacon Kyser Jackson became Chairman of the Deacon and Trustee Boards.  Deacon Jackson later became Chairman Emeritus and was followed by Deacon Homer Q. Collins who later became Chairman Emeritus.  Deacon Pete Quinn then became Chairman of the Deacons, and upon his move to North Carolina in August of 2007, Deacon Alfred Carter was appointed Chairman by Pastor Hunter.  Dr. Hunter faced many health challenges while pastor and eventually became the recipient of a heart transplant.  After thirty-five years of faithful service, Dr. Hunter retired in 2008 as Pastor Emeritus.  He stated that the Lord would send the church a pastor that would take them to the next level.  He then joined the Macedonia Baptist Church of Trenton, along with his wife, Reverend Lovie Irene Hunter, and later transitioned to be with the Lord on August 25, 2013.

Deacon Alfred Carter guided the church for almost two years as the church searched for a new pastor.  Deacon David Bingham served as Pulpit Committee Chairman.  After two rounds of candidates and two rounds of voting, the Lord answered the prayers of the congregation on May 11, 2010. With a unanimous recommendation from the Pulpit Committee and a near unanimous vote of the church, Doctor Joseph Ellis Woods became the seventh pastor.

Dr. Woods is an extremely motivated, and exceptionally dedicated, visionary leader.  Saint Phillips is experiencing a level of administration and organization never realized in its past. We are now known as “A Bridge to Cross You Over”.  Hundreds have united with the church under his leadership, and the church became debt free in his first two years as pastor.  In addition, extensive renovations have been done to the church, the church house has been gutted and redone to become an annex, technology has advanced, many new ministries have been established, women have been elevated in leadership, and the church continues to be a beacon of light to the community. The finances of the church and Bible Study attendance have grown. An additional 501(c) (3) organization is being incorporated, and plans are in the works for future expansion.  The first ministry he organized was the leadership of Pastor Woods was the Seasoned Saints Ministry for members sixty and over, and he later formed the Joshua Generation to focus on the population under age 35 and the Brothers on the Bridge to minister to the men.

Under the forward leadership of Pastor Woods, Deacon David Bingham was appointed as Diaconate Servant Leader. Deaconess Dorothy Upshur was appointed as the Diaconate Servant Leader Assistant, the first female to serve in this capacity. Vedet Carter and Florence Conover became the first females appointed to the Trustee Ministry and served as Servant Leaders. Five women were inducted as Mothers of the Church: Delores Hall, Betty Patterson, Clara B. Foxworth Smith, Betty Stockton, and Artelia Leveret Watson.  Deaconess Mary Collins and Deacon Joseph Burnette were bestowed with Emeritus Status.  In 2015, a portion of Parkinson Avenue where the church is located was officially designated “Saint Phillips Drive”.

Today we pause to thank God for bringing us a mighty long way and to remember those that have made our history so rich. Under our current pastor, we will continue to be a bridge and make more disciples for Jesus Christ.  Destiny awaits, the best is yet to come, and our legacy will continue. To God Be The Glory!